Logicator was voted the top UK control software in a national survey by the Fisher Family Trust and one of the eight most used software titles in D&T departments in UK schools. For an independant review please click here.

Universal Logicator teaches programming via flowcharts, which can be used to control on screen simulations (e.g. the Ghost Train) or via real-world interfaces.  For the PICAXE version of this software (a completely separate product) please see Logicator for PICAXE.

Universal Logicator empowers pupils to  create a control program by simply dragging commands onto the screen and drawing lines between them. Command instructions are simply set at the click of a mouse. Students see the results instantly as their program runs; and it’s easy to edit so they can quickly develop their ideas.

Universal Logicator comes with 14 Soft System Simulations, providing a series of incremental control problems based on real life systems. Each simulation has a free student manual and example Logicator flowcharts.

The Junior version has a simplified interface (simpler flowcharts without the use of variables), is supplied with 4 simulations and supports all the same buffer box interfaces as the Secondary version. Both versions can be downloaded free of charge (see the Resources tab above) and run for evaluation in demo version (no saving/printing in demo mode). 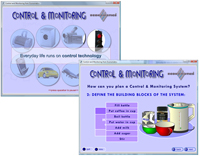 For a range of free downloadable teaching resources including teaching worksheets, example Logicator flowcharts and a flash 'Control and Monitoring' presentation please see the Resources tab above.

A site licence can be used on any number of computers at that site. It may also be used on teachers' laptops for lesson preparation.

Supported on Windows XP, Vista, 7 and 8, and runs on all school networks such as CC3 or CC4.

If you require a new buffer box interface we can supply:

The 'Junior' version has a simplified user interface so the 'variables' based commands (which are not normally used in simpler flowcharts) are not available. It is supplied with 4 on-screen soft system simulations and supports all the interfaces listed above.