An introduction to the PICAXE system

A PICAXE microcontroller is designed to be the brain of your electronic project. Originally designed as an educational system for schools, the PICAXE system has now also been widely adopted by hundreds of thousands of 'hobbyists' due to its ease of use. Each year thousands of high school students are also introduced to electronics and microcontrollers via building a PICAXE project.

PICAXE chips are popular because they are very low-cost, and simple to program using free, easy-to-learn software.

The PICAXE chip can react to input sensors and switch outputs on and off accordingly.

The various different PICAXE chip sizes (8, 14, 18, 20, 28 and 40 pins) give great flexibility on how the system can be used - simply select the chip size as required for your project. On  PICAXE parts almost all the pins can be user configured to be an output, a digital (on/off) input, an analogue input or a touch sensor. Advanced features such as PWM, I2C, SPI,  RS232 and 1-Wire interfacing can also be easily achieved if required.

PICAXE BASIC is much simpler to learn (and to 'debug') than traditional microcontroller languages such as assembler code or 'C'. The software is completely free, and also includes a powerful on-screen simulation for testing your program. 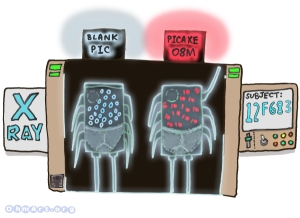 A PICAXE chip is a standard Microchip PIC microcontroller that has been pre-programmed with the PICAXE bootstrap firmware code. The bootstrap code enables the PICAXE microcontroller to be re-programmed 'in position' directly via a simple 'three wire' download cable connection. This eliminates the need for an (expensive) conventional PIC programmer, making the whole download programming system a low-cost USB cable. The same software and download cable is used for all PICAXE chip sizes and project boards.

If you purchase 'blank' PIC chips they will not work in the PICAXE system, as they do not contain the PICAXE firmware. Therefore always buy pre-programmed 'PICAXE chips'.

Next > Getting Started with the PICAXE system.