As part of Rev-Ed’s local primary school outreach programme we have developed 2 free helper apps to allow control of robotics systems from Scratch 2 or Snap!. They were primarily designed to be used with the offline version of Scratch 2, but will also work with Snap!. Scratch 3 is not supported. Both helper apps were developed following direct requests for assistance from the local primary schools and after school coding clubs we work with. 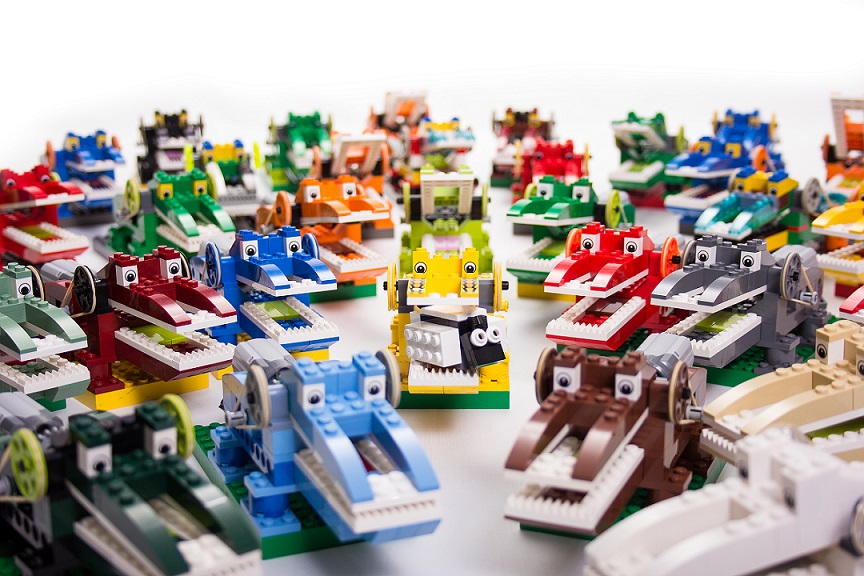 The helper apps were specifically designed for use by non-specialist teaching staff and students in schools, however private home users are also most welcome to use them. These apps do not require any special builds, modified firmware or technical software knowledge. They are complete, self-contained programs and therefore ideal for remote installation via traditional methods (e.g. MSI on Windows) on school networks.

The helper is cross compiled and so available for Windows, Mac and Linux. The app version will also run on Chromebooks. They will also run on many older computer systems still found in schools that can’t be upgraded, such as MacBooks running 10.6.8 or older PCs running Windows XP.

And, in case you were wondering about the picture, we have a congregation of over 30 Lego alligators (or is that a bask of over 30 crocodiles?) that are used in our Scratch primary teacher training days and Scratch coding clubs.  15 of these are each a different single Lego colour ‘purebred’ reptile (yes, BrickLink is highly addictive)!

We also have the following interfaces and Lego WeDo items available to loan to local primary schools / coding clubs when we are not using them (due to their fragile nature we do not ship, you must be able to pickup and return to our offices at BA2 8SF in person):

We also have a few WeDo 2.0 (bluetooth) hubs and BLED112 dongles available for training courses.

S2P allows PICAXE microcontroller programs to be run and tested in real time using Scratch, interacting with real-life inputs and outputs as the Scratch project runs on screen. When you are ready to remove the computer and run the program by itself remotely, you can simply convert your Scratch program into PICAXE code and download it into the PICAXE project board.

For more information please read the Quickstart guides below. The QuickStart guides also contains further setup information for each type of interface (which is particularly essential for Linux users).

S2Bot is available in two different versions, which support different hardware (see tables below). Both versions work with both the online and offline versions of Scratch 2.0 and Snap!. The Native version is no longer developed, all future new devices will be added to the App version.

If the device you want to use is supported in both Native and App versions we recommend you select the 'App' version.

Please read the quickstart guide before use.

Please check whether your equipment needs 'App' or 'Native' in the tables above!

The .sb2 template files are included, simply click the 'Save Scratch Template' menu in the app.

The build number of Scratch is shown at the top left, under the blue ‘full screen’ button.

No, scratch 3 is not supported. The apps are for Scratch 2 offline

Are S2P/S2Bot free to use, even on school networks?

Yes, anyone can use them. You don’t need to ask for permission to install on school networks.

Do I need to configure my school network settings?

Any school firewall must allow localhost http communication on ports 17300 to 17330. This allows Scratch to 'talk' to S2Bot on the local computer. S2Bot does not require an active internet connection to run.

Why use S2P/S2Bot instead of the many various Scratch clones/derivatives?

We were specifically asked to support the main Scratch 2.0 build by our local schools. Now that Scratch has very good ‘plug-in’ support for helper apps you can add most robot functionality within the existing main Scratch build, which means schools don’t have to install yet another, slightly different, robotics program (some of which are based on the old Scratch 1.4 and so look quite different to Scratch 2). It also means that younger students can do both robotic and non-robotic projects using exactly the same software.

Can I use S2P/S2Bot with both the online and offline versions of Scratch 2.0?

Yes, you can use Scratch 2 online or offline versions on Windows (XP or later), Mac (10.6 or later) and Linux (we test with Ubuntu 32-bit). The helper apps are NOT running on a website, they are separate, locally installed, stand-alone applications. This means they should work with the offline version of Scartch and also the online version of Scratch (running in almost any browser).

No, S2P/S2Bot use the new version 2 ‘http extension’ protocol which is not present in Scratch 1.4

Can I use S2P/S2Bot with Snap!

Yes, all of the templates have been converted to Snap! format too.

Can I use on iPad or Android tablets

How do I add the extra ‘robot’ blocks into my Scratch project?

In the Online version select        File > Upload from my computer

Can I add my own robot system to S2Bot?

If you have advanced technical knowledge of a different robotic system and want to develop your own app extensions we recommend you start out with one of the other available open-source Scratch 2 helper app systems such as BlockExt. If you have a fully working robot prototype in Python (or any other programming language) let us know and we’ll try to duplicate it within S2Bot. We do plan to make S2Bot open source in the near future, but the source needs tidying up a bit first!

LEGO, Mindstorms, Wedo, Boost, Powered Up, NXT and EV3 are all trademarks of LEGO. S2Bot is not developed by or associated with or endorsed by or sponsored by LEGO. Sphero, Ollie and BB8 are trademarks of Orbotix. SBrick is a trademark of Vengit Ltd.